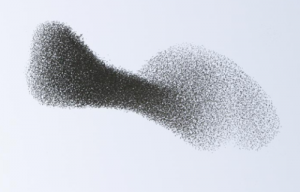 Swarm behaviour, or swarming, is a collective behaviour exhibited by animals of similar size which aggregate together..

A collection of people can also exhibit swarm behaviour, such as pedestrians[100] or soldiers swarming the parapets. In Cologne, Germany, two biologists from the University of Leeds demonstrated flock like behaviour in humans. The group of people exhibited similar behavioural pattern to a flock, where if five percent of the flock changed direction the others would follow. If one person was designated as a predator and everyone else was to avoid him, the flock behaved very much like a school of fish.[101][102] Understanding how humans interact in crowds is important if crowd management is to effectively avoid casualties at football grounds, music concerts and subway stations.[103]

The realization and legitimization of the Internet infrastructure as a site for word and deed opens up new possibilities for Net politics, especially for those already predisposed to extraparliamentarian and direct action social movement tactics.

In early 1998 a small group calling themselves the Electronic Disturbance Theater had been watching other people experimenting with early forms of virtual sit-ins. The group then created software called FloodNet and on a number of occasions has invited mass participation in its virtual sit-ins against the Mexican government.

In theory, when enough EDT participants are simultaneously pointing the
FloodNet URL toward an opponent site, a critical mass prevents further entry. Actually, this has been rarely attained. Given this, perhaps FloodNet’s power lies more in the simulated threat.

On September 9, 1998, EDT exhibited its SWARM project21 at the Ars
Electronic Festival on Information Warfare, where it launched a three-pronged FloodNet disturbance against web sites of the Mexican presidency, the Frankfurt Stock Exchange, and the Pentagon, to demonstrate international support for the Zapatistas, against the Mexican government, against the U.S. military, and against a symbol of international capital.

But within several hours of activating project SWARM, FloodNet was disabled. On web browsers Java coffee cups streamed quickly across the bottom of the screen and FloodNet froze. Participants began to send email with word of trouble. Later that day a Wired writer learned from a Department of Defense spokesperson that the DOD had taken some steps against FloodNet. At the same time, an EDT co-founder received email that the Defense Information Systems Agency had complained about his ECD web site content.

Globally, 20,000 connected to the FloodNet browser on September 9 and 10. This action reverberated through European media. It was later picked up by Wired, ZDTV, Defense News, and National Public Radio, among others. On October 31, EDT made the front page of the New York Times. The story continued to unfold. More interest from the media sphere. On November 22, EDT called for FloodNet against the School of the Americas.24 As part of EDT’s grande finale for the 1998 season, the group plans to release a public version of FloodNet at 12:01 a.m. on January 1, 1999.