From Macaroni to Yankee Doodle Dandy 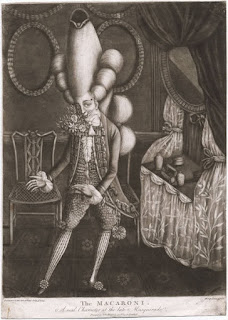 1599, from southern Italy, dialect maccaroni (It. maccheroni), pl. of *maccarone, possibly from maccare “bruise, batter, crush,” of unknown origin, or from late Gk. makaria “food made from barley.” Used after c.1764 to mean “fop, dandy” (the “Yankee Doodle” reference) because it was an exotic dish at a time when certain young men who had traveled the continent were affecting French and Italian fashions and accents. There is said to have been a Macaroni Club in Britain, which was the immediate source of the term.
Do NOT follow this link or you will be banned from the site!