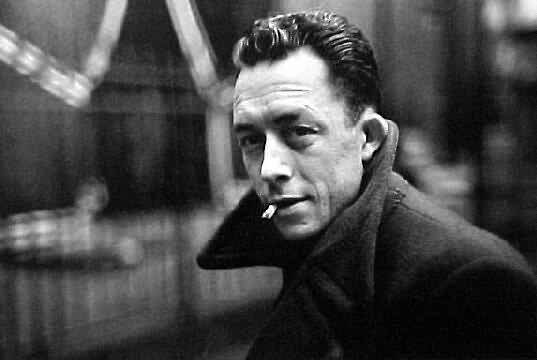 Here’s Albert Camus from the “Myth of Sisyphus”:  “I derive from the absurd three consequences:  my revolt,  my freedom, and my passion. By the sheer activity of consciousness, I transform in a rule of life what was an invitation to death—and I refuse suicide.”

Camus suggests that an honest encounter with the universe’s absurdity—the suffering and death in it, and the universe’s apparent lack of purpose and indifference to us—paradoxically can lead to a vital life. It is an outraged person’s refusal of the absurd that can then affirm rebellion, freedom, and passion against it.

Put another way: Once you face blind fate directly, and pass through nihilism and the dark night of the soul, there is still the possibility for making a meaningful life via rebellion, freedom, and passion. And one of those components in a meaningful life is your fellow human beings. Camus suggests that there is at least one “higher meaning” to existence in the universe: other people. And it is a “higher meaning” in part because human beings, in their conscious encounters with the universe, are collectively outraged at the suffering and indifference here, and demand that human consciousness be valued (since nobody else—or nothing else—will value it). In other words, the higher value of human life comes from our experience of it ourselves, and the empathy we feel for others in a similar bad situation (think The Plague here). That’s part of the rebellion of human consciousness against an indifferent universe—an affirmation of the value of the consciousnesses of others—and of oneself as well—against a universe that doesn’t care.

As Camus wrote in “L’homme révolté”: “The solidarity of humanity is based on the revolt, and the justification of the revolt is man’s solidarity with others.”

In other words, human connection and solidarity is justified by the revolt of human consciousness—and thus by our ourselves (and ourselves alone). No one else—and nothing else—justifies it—or needs to justify it.